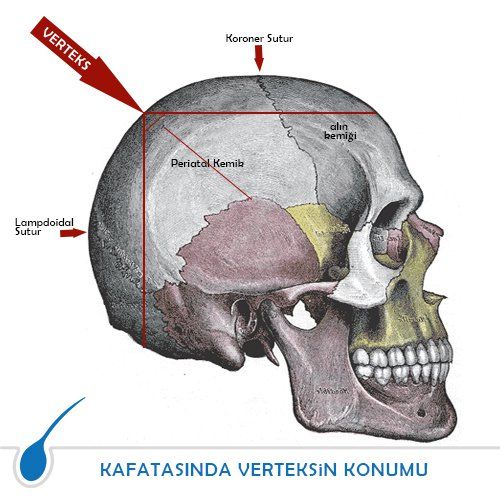 In 1991, the concepts of “micrograft” and “minigraft”, which offer a valuable solution for male pattern hair loss and form the basis of today’s hair transplantation, and which can easily cover large areas, were put forward by Uebel and adopted in a short time. In that period, up to 2500 grafts, and now 2-3 times this number, if deemed necessary, can be easily collected. There has been a significant increase in the success of hair transplantation operations with the successive positive developments with the FUT and subsequently the FUE technique, where hair transplantation has become widespread.

The vertex region has another value in hair transplantation. In the vertex, which is a region with its own arithmetic in a small area, each angle of the hair hair has its own dynamics and makes different angles in harmony with others.

In order to achieve the desired naturalization, special techniques are required in the transplantation of the hair of the peak region, which are arranged at different angles and on successive sides.

The hair swivel, which has a tendency to the left or right region on the periotal bone, completes its movement on the vertex region and ensures the proper orientation of the hair follicles around the head. Although the vertex region is not the same for everyone, it has similar characteristics.

Vertex images showing different physiological characteristics are given below.

Hair Loss in the Vertex Area

In individuals with a genetic predisposition to “Androgenetic Alopecia” (AGA), which is popularly called male pattern hair loss because it is mostly seen in men, hair loss due to androgen, known as the male hormone, starts from the vertex region.

Androgenetic alopecia can be seen in both genders, although it is called “male pattern hair loss.
After the regression of the forehead line, this form of shedding, which continues with the openings in the vertex region, gradually increasing in the vertex region where blood circulation is less and hair follicles are less nourished, can be observed starting from adolescence. It has been observed that AGA occurs in 30% of men by the age of 30. With the age of 50, this rate rises and reaches 50%. Hair loss in both sexes primarily progresses forward from the vertex of the scalp.

Vertex baldness, which usually occurs in genetic predisposition and male pattern hair loss, cannot be prevented, although it is said that it can be slowed down with various drug bases, since the cause of its occurrence cannot be eliminated.

Spills that start in the vertex can be classified into certain classifications thanks to the researches, and although it is not known how long it will take to complete the spill, the results can be categorized.

The “Norwood Scale”, which was revealed by Hamilton Norwood as a result of his research and incidence study with 1000 adult men, clearly reveals the extent of hair loss in the vertex area at which hair loss stage.

Type 1. No or minimal recession is now observed in the Forehead Bone (Frontemporal area) area and hairline.

Type 2. Triangular recession is observed in the frontotemporal area, progressing symmetrically on the anterior forehead line. Even if the shedding is seen in the middle of the forehead, it is less than the right-left forehead area.

Type 3. Hair loss and baldness, which cannot be noticed in the 1st and 2nd stage, have become visible and noticeable in this stage. The spills in the vertex region have become evident and the opening has started to form. The symmetrical regression in the anterior forehead line has begun to deepen by the temple.

Type 4. There is obvious dilution in the vertex. The middle part of the perinatal region was noticeably opened, and the hair was not lost in the areas close to the skull sutures.

Type 5. The balding areas have increased, and the scalp has begun to be visible from afar. The diameter of the round opening in the vertesque area is getting larger.

Type 6. The opening from the vertex and anterior forehead line has begun to merge. The middle upper part of the frontotemporal region is still hairy.

Type 7. It is the last stage of hair loss. Finally, the frontotemporal (forehead) hairs were lost in the last hair, and only the hair follicles extending in the form of an arc in the posterior region behind the two ears remained. 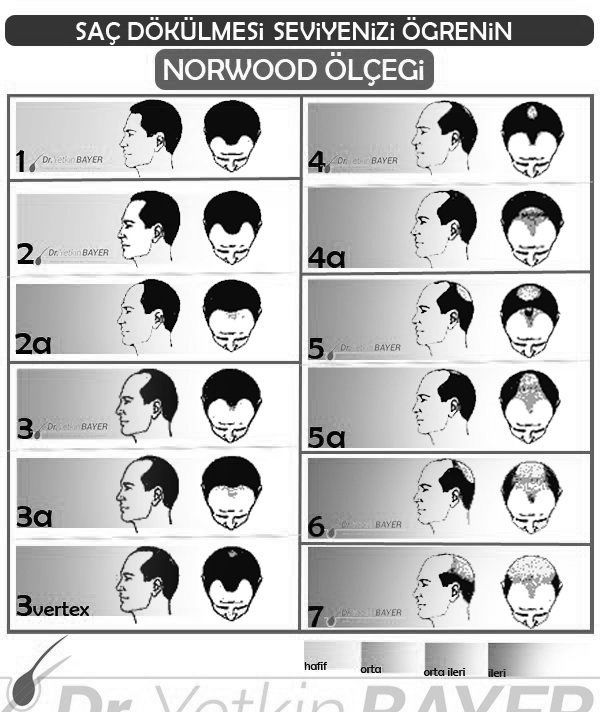 While researches show that in some cases, the period of full baldness can be completed within a short period of 5 years in male pattern hair loss, it is known that this period may extend up to 25 years in some cases. Since the factors affecting hair loss and the changes they cause in the physiological structure of the person are different from each other, it is impossible to give clear information about the duration of shedding, but the average course can be determined with frequent tests.

In the vertex, fluctuations can be seen in the course of hair loss. After 3-6 months of rapid shedding, it was observed that the shedding slowed down for about 1 year.

The point to be noted here is that the male pattern hair loss in the vertex, which has been stated to have a “wavy course” in the researches, is mixed with the effects of factors such as drug solution or cream that coincide with that period. In order to avoid such a mistake, it is recommended to keep the observation processes for up to 1 year.

HAIR TRANSPLANT IN THE VERTEX AREA

Since the vertex region is outside the eye level, it is not as important as the front forehead line by the patients. Individuals who experience shedding only from the vertex region or 4. -5. The problem of the vertex region is much more obvious for those who have type shedding, but hair transplantation is extremely valuable in terms of obtaining the most ideal and aesthetic appearance for the person.

Hair transplantation performance in the vertex region, the front forehead line, is less than in other regions.

It is a problem that occurs when hair is transplanted to the vertex area prematurely. The shedding course of the individuals who have opened in the summit region should be analyzed well. The problem of horsetail in the vertex region arises in early and unplanned plantings.

If the hair loss continues in the peak area after hair transplantation, an image with hair in the middle and bald edges occurs because the newly transplanted hair will not fall out.

You should pay attention to these for the plantings to be made in the Vertex Region.

Individuals with hair loss in the vertex region should make a correct decision on the time of hair transplantation and should not act in a hurry in this regard. The possibility of continued opening should be considered.

Before planting the vertex region, it is necessary to pay attention to the fact that shedding is completed or that it has reached the appropriate stage for planting. Otherwise, a new operation may be required for the vertex area that will continue to open, or because the donor area is not enough, disturbing views may occur in the future.

Transplants to be made in the Vertex Region require more professionalism, make the plan of the vertex region carefully with your doctor and be sure that your doctor will participate in your operation.

The hair planted in the vertex area reaches its most natural form after 12 months, the scalp in this area is a little harder and thicker, so feeding the roots is more difficult and the hair follicles may take longer to grow.

If there is an extra care recommended by your doctor for this area, do not neglect it.